A guide for the Fall 2021 Simmons Community Read

Who is Yaa Gyasi? 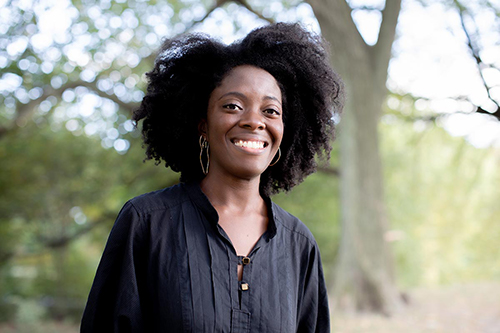 Yaa Gyasi is the author of the highly acclaimed debut novel Homegoing and a recipient of the National Book Foundation's 2016 "5 Under 35" Award. Gyasi's brilliant and relevant novel moves through histories and geographies and captures—with outstanding economy and force—the troubled spirit of our own nation. An illuminating speaker, Gyasi captivates audiences with her sincerity and compassion. . . . Her stunning follow-up novel, Transcendent Kingdom, is a powerful, raw, intimate, deeply layered novel about a Ghanaian family in Alabama. Transcendent Kingdom was an instant New York Times bestseller.

Born in Ghana and raised in Huntsville, Alabama, Gyasi is a graduate of the Iowa Writer’s Workshop and lives in Berkeley, California. She is the winner of the National Book Critics Circle John Leonard Prize, the PEN/Hemingway Award for Best First Novel, and was a finalist for the Dayton Literary Peace Prize for Fiction and the PEN/Robert W. Bingham Prize. Homegoing also was a winner at the 2017 Audie Awards.

You can find works by Yaa Gyasi available through Simmons here.

Find the book at your local public library, or here.